LeBron James and the Weight of High Expectations 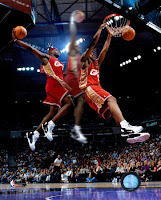 Last year around this time I wrote about the NBA Finals and how Ray Allen's stellar Game 2 performance (8 three pointers made) was as much the product of teamwork as individual brilliance. Unfortunately, things went south for Allen and the Celtics from there -- they ended up losing in seven and Allen never approached that level of performance again.

This year, a similar drama is unfolding on an even grander scale. After destroying the Bulls in the Eastern Conference Finals, LeBron James has basically gone missing. Instead of imposing his will on the game (he is the best player in the world, after all), he's been strangely passive. It is hard to escape the feeling that if the Heat end up losing, LeBron will have cost them the series.

For reasons that I don't fully understand, I find myself fervently rooting for James. I think it is partly because I believe he got a bum rap for leaving Cleveland -- I don't understand why so many fans and writers seemed to think that this decision carried some sort of moral weight. And I think it is partly because, despite his physical dominance, LeBron has in fact always seemed a little fragile. There's something more human (read: endearing) about him than the players he is most often compared to, Kobe Bryant and Michael Jordan.

While there are plenty of theories about why LeBron is playing as poorly as he is (the fatigue of a long season, bad chemistry with Dwayne Wade, the defense of the Mavericks, etc.), the one that I find most convincing is that the moment has simply gotten to him. The pressure of constantly being watched, of being hated by millions of people, of being expected to be the best player every time you take the floor...it is basically beyond my capacity to imagine. In Game 5, LeBron had a triple double -- something that's only been done by about a dozen players before, all of them basically hall-of-famers -- and was universally criticized for having a poor game. There's a lesson in here somewhere about the importance of managing expectations and the danger of setting unrealistic standards.
Labels: Basketball Non-work