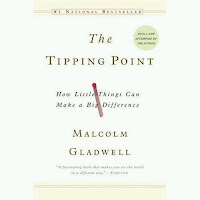 Elise sent along a link to the following article from Fast Company: Is the Tipping Point Toast? The article looks at the idea, popularizedby Malcolm Gladwell, that social trends can often be traced back to a handful of influential individuals. In the Fast Company article, Duncan Watts argues that Gladwell and his allies in the marketing industry vastly overrate the importance of "influentials."
I'm not smart enough to assess whether Watts' arguments are convincing or not, frankly. I do think he offers a valuable counter-narrative to the general excitement that Gladwell's work has generated about the power of influential individuals. And certainly the underlying theme of skepticism that runs through the piece -- the idea that no one really knows how to pick hit songs or start fashion trends -- I think is on the money.

The reason I'm interested in all of this is that we have recently launched an experiment in Red Hook called Youth ECHO that seeks to convince influential teenagers to spread an anti-crime message to their peers in the local public housing development. I don't think that Watts' argument invalidates the logic behind ECHO. Even he seems to agree that "some people are more instrumental than others." And needless to say, trying to influence behavior in a small, relatively closed community like the Red Hook Houses is different than trying to mass market a soft drink across the US. I'd argue that peer pressure and the opinions of leaders probably matter more the smaller and more intimate the setting is.

I'm not sure that the theory behind ECHO is accurate -- it is meant to be a test, after all. Whether we fail or succeed in influencing teen opinions in Red Hook (and given the depth and breadth of the problem -- youth crime -- the odds are against us), I think we will learn some interesting things.
Labels: Books Malcolm Gladwell Youth ECHO