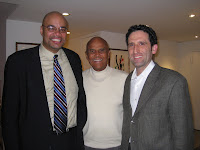 The past week has been another busy one here at the Center for Court Innovation. I'm writing to share a few tidbits. As always, this is not meant to be an exhaustive report -- apologies to all that I've missed....

Personal Stories: Last week saw the official release of "Personal Stories," the book about drug court graduates from across the state that was created by the Center for Courts and the Community. Jackie and Dory made a great short video to promote the book, which will be available on the Internet at some point -- I'll let you know. They are also using the book as a hook for Law Day activities this year, encouraging drug courts across the state to reach out to local schools to teach kids about the dangers of drug use.

Drug Court Conference: Last week in Buffalo was the annual NY drug court conference. This is a major event that draws more than 700 judges, attorneys, probation officers, court managers, drug treatment providers and others. As usual, Valerie and Dennis played a major behind-the-scenes role helping to organize the event. A number of other Center staffer attended to make presentations and spread the word about our work (thanks to Phil, in particular, for putting together our info table).

Harry Belafonte: Harry Belafonte (!) has reached out to us seeking advice as he begins a new enterprise -- creating cafes in several cities to employ ex-gang members. Chris and Adam had dinner last week with Belafonte, who hopes to locate one such cafe in Harlem. While the project is still at an early stage of the planning process, Belafonte brings a lot to the table in terms of resources and the potential for media exposure, so I wouldn't be at all surprised to see his initiative get off the ground quickly. If it happens in Harlem, there are probably a number of opportunities for partnership with the Harlem Community Justice Center.

International Travels: Last week saw Aubrey in China to speak at a conference convened by the UN and International Bridges to Justice. There is an effort underway to reform the education through labor or administrative detention system in China, which is often used as a non-judicial response to minor crime. They are looking for new and less punitive responses to low-level offending and reached out to us to learn more about Bronx Community Solutions and the community court model in general. At the same time (more or less) that Aubrey was flying to China, Julius was returning from a whirlwind trip to Scotland, where he seemingly met with every high-ranking justice official in the country. The good news is that after a period in which little to no progress was made, it appears a community court for Glasgow is making headway again.

Misc: A few other notes, in Larry King style...we're happy to welcome Robyn back to the office after her maternity leave...speaking of kids, if you haven't already heard, Angela and Aaron are the latest Center staffers to join the parental ranks...our efforts to get money from the NYC Council and the US Congress are in full swing thanks to Al and Liberty...this week should see the publication of our new academic journal, which we have put together with Pace Law School and the NY State Judicial Institute...
Labels: Bronx Community Solutions Center for Courts and the Community Drug Court Harlem Community Justice Center Scotland