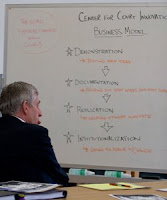 A couple of weeks ago, Jack Straw, the Lord Chancellor and Secretary of State for Justice of Great Britain, visited the Red Hook Community Justice Center in Brooklyn. After his visit, he wrote an op-ed describing his experience at Red Hook for The Guardian. Given its eloquence, I thought it was worth sharing an excerpt:

This week, I have been in New York to visit the Red Hook Community Justice Center. This was the United States' first community court seeking to solve neighbourhood problems like drugs, crime and domestic violence not as separate problems, but as one. The centre has done much to increase people's confidence in criminal justice, from just 12% of residents feeling confident about their court before the centre opened in 2000, to 71% in 2001.

These are impressive statistics, hard to ignore. We're lucky in the United Kingdom that we have so much in our justice system of which we should be proud... But we should not be so proud that we are unable to learn lessons from others. In New York, they have recognised that the courts cannot do it alone. Without the cooperation of the community, many offenders simply repeat the cycle of offending and detention.

Community justice works by making courts more responsive to the priorities of local people. By strengthening the links between the courts and the community, I believe people's confidence in the work of the court will rise and the community will feel more confident about tackling offending behaviour.

In community courts, judges come out from behind the bench to attend local events. Offenders are ordered to carry out unpaid work as part of a sentence on projects nominated by residents. In this way, justice really is seen to be done.The courts aim to break the cycle of reoffending—and doing so is always the top priority of such courts —by tackling some of the underlying causes of crime such as drug and alcohol addiction, housing, education or debt problems. Sentences aim to include programmes to help solve these problems. Offenders are often young men leading chaotic lives, ill-equipped to deal with the complexities of providing for themselves.

The work of community courts doesn't stop at sentencing. They are able to order people back to court at any time during a community order, to check on their progress but also to support and encourage them when they are doing well. Research with offenders suggests the problem-solving approach improves compliance with their sentence and helps them avoid reoffending in the future. I want the public to see their courts as an accessible and vital part of their community. Courts that make a visible difference to the day-to-day lives of everyone who lives there, including offenders.

The community courts in England and Wales are part of a growing international movement that seeks to improve both neighborhood safety and public trust in justice. Recently, we have seen the idea of community justice spread to Canada, New Zealand, South Africa, Ireland, Australia and Scotland. Other countries that have visited our model projects or asked us to help them rethink their approach to neighborhood crime include Armenia, Georgia, China and the United Arab Emirates (to name just a few). If it continues to flourish, the community justice movement has the potential to achieve broad change in criminal justice systems across the world—and in the process help improve the lives of millions of disadvantaged people.
Labels: Australia Canada England Red Hook Community Justice Center