Basketball in the Bronx 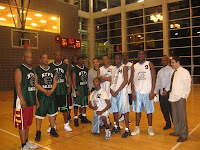 Notes from around the Center...

Midtown Community Court: The Daily News used Eliot Spitzer’s troubles as a hook for a column about Midtown’s work with prostitutes.

Crown Heights Community Mediation Center: There’s good news to report from Crown Heights, which in addition to having moved into new offices, has just been awarded critical funding from the Independence Community Foundation. In the days ahead, the Crown Heights team will be providing mediation training to student government leaders at Brooklyn College and helping to facilitate a new coalition that was created in response to a recent alleged hate crime in the neighborhood.

Comings and Goings: I'm sad to report that Amy M. from the research department and Carolyn T. from the communications department will be leaving us over the next few weeks. Please join me in wishing them well as they embark on new adventures.
Labels: Bronx Community Solutions Crown Heights Community Mediation Center Midtown Community Court