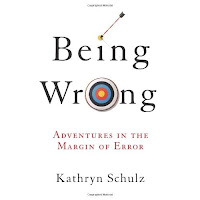 Apologies for the lack of posts of late. I've had a busy week, highlighted by a visit from an Australian professor who is starting a Center for Court Innovation down under (more on this in the months to come), a trip to NYU to discuss procedural justice with the great Tom Tyler, a benefit to suport the Brooklyn Community Foundation and a guest lecture at Brooklyn Law School on failure. Speaking of failure, we are putting the finishing touches on a new failure-related monograph that will feature interviews with dozens of leading criminal justice scholars and policymakers talking about the lessons they have learned from being wrong on occasion. As it turns out, we aren't the only ones to come up with this idea. Kathryn Schulz, who wrote the book Being Wrong (which I have just started) has been doing a similar series of interviews for Slate. Worth checking out.
Labels: Books Failure procedural justice