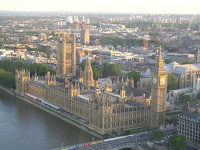 Just a quick report from London, where the pace of criminal justice reform feels feverish at the moment. It seems like almost every day brings a new headline about some aspect of the criminal justice system, whether it be the government's decision to close a number of magistrates' courts, efforts to expand the use of restorative justice or a justice minister's controversial speech about investing in entertainment for inmates. Hanging over all of this is the specter of massive funding cuts driven by Prime Minister David Cameron's decision to cut the deficit. Through a series of lucky breaks and good strategic moves, Aubrey has found himself with a ringside seat as 10 Downing Street and the Ministry of Justice attempt to forge a new, cost-effective approach to justice reform. We're coming to the end of our 6 month study of whether it might be feasible to create an experimental Centre for Justice Innovation in London. I'm feeling cautiously optimistic at the moment. More to come...

PS: Last week, the Philadelphia Inquirer ran an op-ed that I wrote entitled "Failures are key to public safety success."