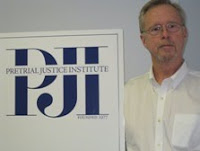 I spent the last three days in Washington D.C. -- meeting with officials at the Department of Justice, discussing plans for the publication of our book on failure with the Urban Institute Press, attending a workshop on sentencing reform that we co-sponsored with the ABA and other agencies, and participating in a roundtable on technical assistance to pre-trial service agencies convened by my pal Timothy Murray of the Pre-Trial Justice Institute. Among other things, Tim is trying to amp up the visibility of pre-trial detention as a public policy issue. According to figures that he shared at the meeting, fully two-thirds of the inmates in American jails are pre-trial detainees and 85 percent of them are there simply because they couldn't make bail. In the days ahead, it will be interesting to see how much traction the Pre-Trial Justice Institute can generate for reform efforts. While pre-trial services rarely grabs headlines, I would never bet against Tim Murray.
Labels: BJA Failure