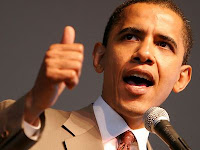 While researching a presentation that I am giving later tonight, I stumbled across this paragraph, taken from Obama's official campaign literature:

Drug courts have proven successful in dealing with non-violent offenders. These courts offer a mix of treatment and sanctions, in lieu of traditional incarceration…The success of these programs has been dramatic: One New York study found that drug court graduates had a rearrest rate that was on average 29 percent lower than comparable offenders who had not participated in the drug court program. These programs are also far cheaper than incarceration.

If I'm not mistaken, I believe this is a reference to our multi-site New York drug court evaluation. Pretty cool.
Labels: Barack Obama Drug Court Research