As Good As His Word 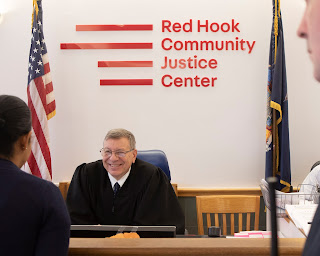 The legendary Alex Calabrese is fast approaching retirement as the presiding judge at the Red Hook Community Justice Center in Brooklyn.  I would be remiss if I didn’t take this opportunity to honor the great professional debt that I owe to him.

Over the years, I have taken I don’t know how many people to visit Alex’s courtroom.  Sometimes it was a high-ranking government dignitary.  Sometimes it was a foundation executive.  Sometimes it was a reporter.  And sometimes it was just a friend.  But no matter what the circumstances – and no matter what kinds of cases were appearing in front of him – Alex always delivered.  He made my job – explaining the nuances of criminal justice reform or procedural fairness or problem-solving justice – incredibly easy.  His consistency was breathtaking.  Every time I ever saw him in the courtroom, he managed to focus his attention on the people appearing before him and to truly reckon with their complicated humanity.  He always conveyed thoughtfulness, decency, and respect.  And even when he had to deliver tough messages – for example, when people were failing to comply with their sentences – he did so with understanding and compassion.  He was, quite simply, a great judge.

But of course I’m not the only one to recognize this. And I’m not the only one to owe Alex a significant debt. Alex’s approach on the bench inspired a host of reformers, including judges like Victoria Pratt, who, as she explains in her recent book The Power of Dignity, worked to bring the lessons of Red Hook to New Jersey.  Alex’s influence can be felt across the country and around the world.  Just today, I received an email from a judge who wrote to introduce me to “Amsterdam’s Alex Calabrese.”  Indeed, there are versions of Alex in dozens of courthouses, including as far away as Australia.

But Alex’s impact was felt most profoundly in New York.  As has been well-documented, the health, vitality and safety of Red Hook has improved tremendously since the 1990s.  The Justice Center wasn’t the only thing that changed, of course, but it was a big piece of the puzzle.  Over the years, Alex has offered off-ramps out of the justice system for literally thousands of local residents, linking them to services and helping them get sober, find jobs, and reconnect with their families.  The streets of Brooklyn will continue to feel the ripple effects of Alex’s work for years to come.

When the Justice Center opened, Alex offered brief remarks.  Among other things, he said, "May court and community come together to see that justice is done at the Red Hook Community Justice Center."  History will judge that he was as good as his word.