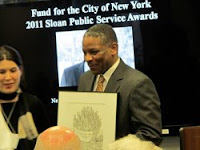 Last Thursday was one of my favorite days of the year: the annual dispensing of the Sloan Public Service Awards by the Fund for the City of New York. These awards honor a half dozen New York City public officials each year for extraordinary work. Crucially, from my perspective, the prizes (which include a check for $7,500) are given not to the deputy mayors and commissioners who already get a fair measure of public acclaim, but to people further down the hierarchy in city government, including frontline school principals, nurse practitioners, library outreach workers and park designers.

For the past several years, I've gone on a bus trip with Fund for the City of New York officials to present the winners with their awards at their place of business. I hesitate to use the word because it sounds kind of corny, but it is easily one of the most inspiring things I do all year. It is a powerful corrective to the false narratives that we are sometimes fed about government and about urban life -- e.g. that public sector employees are lazy, that poverty is intractable, that racial conflict is hard-wired into the fabric of the city (to mix metaphors horribly), etc etc.

I'd say more about the day, but it turns out one of my fellow travellers on the bus, Liz Neumark, has beaten me to the punch. Check out her blog on Huffington Post for more details about this remarkable program.
Labels: Fund for the City of New York

"It was hard to say goodbye"

Small Sanities is a blog written by Greg Berman of the Center for Court Innovation. It covers non-profits, justice reform, pop culture, sports and other topics.