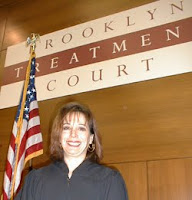 This morning I attended a celebration of New York City's drug courts in Brooklyn. It was like a drug court graduation on steroids: hundreds of people in attendance and dozens of happy graduates talking about how their lives had been saved thanks to the combination of treatment and judicial supervision. Because much of the event was dedicated to the history of drug courts in New York, I found my mind wandering back to the early days of the Brooklyn Treatment Court. It is easy to take for granted now that drug courts are everywhere and such a potent political force, but in the early days of the Brooklyn Treatment Court the project felt very much like a wild experiment. I remember lots of teeth-gnashing and hand-wringing until we were fortunate enough to have Val sign on as project director. She brought a number of talents to the table: not only a deep knowledge of the criminal justice system and all of the relevant players, but a fierce commitment to doing the right thing and a willingness to step into the background if it was the right thing for the project. While numerous players helped make the Brooklyn Treatment Court a success, including two -- Brooklyn DA Joe Hynes and judge Jo Ann Ferdinand -- that were honored today, Val's contribution was crucial. So, kudos to Val and also to Christina who helped organize today's event.
Labels: Drug Court