And Speaking of Joe Hynes... 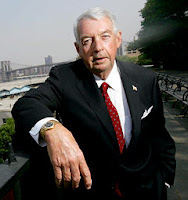 Tonight I attended the installation of Charles J. Hynes as the Brooklyn District Attorney for a record sixth term. The event offered numerous reminders of why Hynes is such a remarkable prosecutor. As New York State Chief Judge Jonathan Lippman said in his keynote address, DA Hynes has "never met a new idea he didn't like." The list of innovative programs that he has launched is truly staggering -- reentry, domestic violence, truancy, drug addiction, and bias crime are just a few of the problems that he has targeted with new initiatives. As a Brooklynite, I was proud to hear how, over the course of Hynes' 20 years in office, the borough has gone from one of the most violent urban areas in the country to one of the most livable. As part of the Center for Court Innovation, I was even more proud to hear several mentions of projects that we worked on with the DA's office, including a special acknowledgement of the role the Red Hook Community Justice Center has played in turning around Red Hook.
Labels: Charles J. Hynes Jonathan Lippman Red Hook Community Justice Center