The Feelies vs. Arctic Monkeys 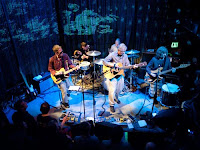 Over the past couple of weeks, I've seen two of my favorite bands in concert: the Feelies and Arctic Monkeys. Both confounded my expectations. I had hoped to be blown away by Arctic Monkeys, but they were a slight disappointment. Their newer material, which was featured prominently at the show, is a significant departure from what they do best. By contrast, the Feelies know what they do well and choose not to depart from that formula. I had worried that they would feel like a limp nostalgia act, but nothing could be further from the truth: somehow they seemed to me more vital than in their 1980s heyday. Of course, the Feelies have never been as ambitious (or successful) as Arctic Monkeys. For me, Arctic Monkeys represent attempting grand new things (and perhaps failing) while the Feelies represent staying in your lane (and thus limiting your chances of grand success).

I've been thinking about this stuff a fair amount of late. Last week, I celebrated my 15th anniversary at the Center for Court Innovation. As I look back on these years of change and growth, it occurs to me that a big part of running an agency is having good judgment about when to push the envelope and when to stick to what you know best. Hopefully, we've gotten those decisions right more often than not at the Center.
Labels: Arctic Monkeys Music Non-work The Feelies