An Old Friend in Red Hook 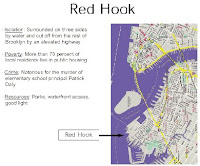 I spent this morning in Red Hook, giving a couple of city officials a tour of the Justice Center. The highlight was running into Wally Bazemore, whom I hadn't seen in I don't know how long.  I first met Wally back in the early 1990s when he was the head of a group called Mad Dads of Red Hook that sought to "take back" public areas in the neighborhood that had become open air drug markets.  He was an intimidating figure in those days -- and he still is, although he seems to have mellowed a bit with age.  I always admired Wally for his devotion for the neighborhood and his courage in supporting our planning efforts in the early days of the Justice Center.  Since then, he's stayed involved with the Justice Center -- he's been one of the leaders of the youth baseball league -- but, for whatever reason, our paths haven't crossed much.   It was a good reminder that the success of projects like Red Hook really is built on dozens and dozens of relationships and contributions from a broad array of people in government, non-profits and the community.
Labels: Red Hook Community Justice Center

"It was hard to say goodbye"

Small Sanities is a blog written by Greg Berman of the Center for Court Innovation. It covers non-profits, justice reform, pop culture, sports and other topics.