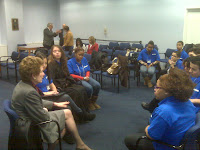 Al and I spent the late afternoon and evening in Staten Island with former chief judge Judith Kaye visiting our new youth court.   The youth court had only met once or twice before, so I was a little nervous about what we would see.  The hearings were also attended by the Staten Island DA, Dan Donovan, and Judge Minardo, the supervising judge for Richmond County, so the stakes were high.    The good news is that the youth court members were extremely poised --they clearly have been well drilled by Jackie and Melissa and Sabrina and the rest of the team.   The highlight of the evening was an informal Q and A session with Judge Kaye after the hearings.  The kids had a great time asking her about how to become a lawyer, the challenges of being chief judge and her transition to her new job at Skadden Arps (among other topics).
Labels: Judith Kaye Staten Island Youth Court