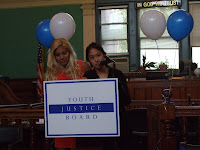 One of the very few things that I don't love about my job is having to watch talented, likable people leave the Center. Today it is time to say goodbye to Crista from the development team and Katherine from QUEST. While both have been with us for a relatively short time, they each have impressed me with their smarts and their commitment to change. I'll miss them both. I hope you'll join me in wishing them well.
On the flip side, one of the real pleasures of having worked at the Center for as long as I have is that I get to watch staffers, particularly young staffers, grow and develop. I was thinking about that tonight as I attended the graduation ceremonies of this year's Youth Justice Board class at the Harlem Community Justice Center. It was a lovely event that included mini-speeches from each of the Youth Justice Board members, who spoke eloquently about their experience on the Board. But what really made an impression on me were the remarks by Dory, Linda and Matt each of whom was poised, charming, articulate, funny...I could go on and on, but you get the picture. It really is marvelous to work with such great people on such meaningful work.
Labels: Harlem Community Justice Center QUEST Youth Justice Board